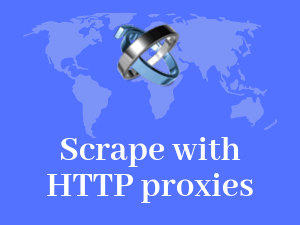 We produce more data every day. By now, terabytes of data have been generated. And this trend of data generation is heading upwards. A business model started evolving and will continue to grow in every domain. This business type doesn’t focus on producing more data. Actually, it focuses on sorting the data and returning the relevant bits of information to the user. This business is focused on scrapping data from multiple databases with the intent of returning only relevant data points. Moreover, as this business model relies on scraping other domains for data, project managers need to buy HTTP proxies in order to perform multiple queries. In this article, we are going to explain what are HTTP proxies and how one can use them. Moreover, three domains will be presented, where data scraping businesses have the opportunity to grow.

WHAT ARE HTTP PROXIES?

Regardless of their use, all proxies split into two main categories. One category is comprised of SOCKS proxy used for special use projects and certain programs. And the second category is comprised of HTTP proxies. These proxies can be considered as general use proxies because they connect through the HTTP/HTTPS protocol. Therefore, various number of projects and queries can be performed using them.

Furthermore, HTTP proxies can be split into public and private proxies. This categorization is given by who uses the proxy. A public HTTP proxy can be used by anyone who has the IP and PORT details. While public proxies are free, they have poor specs, they are slow and they are often offline. Thus, a webmaster developing a project can’t rely solely on HTTP public proxies.

Depending on the project type, some developers might need shared or private HTTP proxies. And others can use a mix of both types of proxies. SSLPrivateProxy provides only HTTP/HTTPS proxies for small and large scale proxies. Moreover, some proxy packages are allocated especially for certain use. For example, SEO proxies are cheaper proxies and can be used to scrape search engines.

Regardless of the proxy type needed, SSLPrivateProxy can offer and allocate working proxies for developers.

HOW TO USE HTTP PROXIES TO SCRAPE

Once the proxy source (provider) has been selected and the proxy type and volume ordered, developers, need to start using these proxies to scrape certain projects.

The setup for a professional scraping service involves several tools. First, developers need a server to run 24/7, then they need a scraping tool and proxies through which to perform their queries.

Usually, most scrapers are developed by the team using it. However, there are some scraping tools available online. Similar to Scrapebox, which is used for scraping search engines, these scrapers are ready for purchase and the buyer need only to implement the proxies and start scraping.

In any scraping process, HTTP proxies are needed because the process is automatic. The scraping will perform from several tens to thousands of queries per minute. Most websites and online platforms will block such a large volume of queries coming from one IP. Moreover, they will block and restrict any access coming from that IP. Therefore, developers need to use HTPP proxies to perform these queries from several IPs. Thus, avoiding any blocks while scraping the needed data.

There are several domains which are more suitable to scraping. In these domains, developing a scraping tool is also a great business opportunity. One common aspect to all these three domains is the decentralization of data. Thus, the opportunity lies in providing users a one-stop shop for all the data relevant to their queries.

In other words, the opportunity relies on providing users with relevant data gathered, or scraped, from several domains. Thus, the three domains in which developers can find opportunities by developing a scraping tool to organize and filter data are real estate, financial data gathering, and travel.

In the real estate domain, a scraper will use HTTP proxies to scrape several domains and real estate listing websites to provide a single result with all the relevant ads for a particular search query.

The financial data gathering presents a great opportunity for developers looking to build a scraper because each stock exchange commodity exchange or FX exchange are separate entities. Thus, developers can use HTTP proxies to scrape and provide real-time financial quotes. Finally, the travel industry regardless of the subdomain, such as plane tickets or accommodation is similar to the real estate one. There are several platforms and domains which a user must access, thus providing a scraper and returning the relevant data in one place is a great opportunity for developers.

Developers can develop a scraping tool and use HTTP proxies to scrape and develop a business around data gathering and scraping a particular domain. They need HTTP proxies to protect their tools and server’s IP from getting blocked due to multiple queries performed at the same time. Moreover, before deciding on which domain to scrape, developers must consider that some domains are better suited for scraping than others.

Very good service and very fast proxies. I even cancelled proxies from other provider even though they are much cheaper. My proxies have never been banned so far!!! The support is also pretty quick in replying my emails, even on Christmas Eve!! You guys rock!! Keep up the good work. As long as you maintain the quality service, more customers will definitely come.
Merry Xmas and Happy New Year!!! — William, Testimonials