By SSLPrivateProxy on September 5, 2016 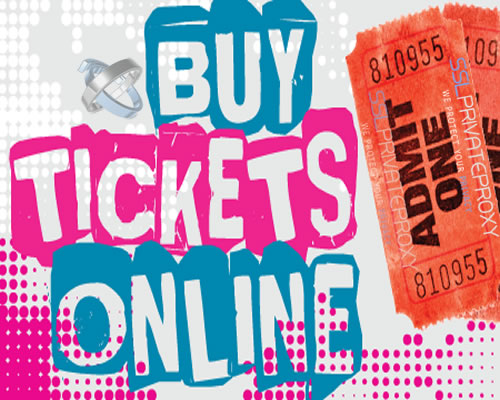 Buying a concert or event ticket over the Internet these days can be daunting. The best solution for getting tickets online are ticketing proxies sold by private proxy providers.

The challenge with buying tickets is that they are released at a certain time when people flock to ticketing websites. This rush makes the buying tickets process impossible. Ticketing proxies can help you solve this problem and you can get the desired tickets.

WHAT ARE TICKETING PROXIES

The issue with ticketing websites such as TicketMaster, AXS, StubHub, TicketClub, TicketFly, TicketsNow, Evenue, Eventim, ViaGoGo, LiveNation is their restrictive policy and easiness when it comes to banning people and locations for accessing their websites.

Ticketing proxies, often referred as TicketMaster Proxies, are private proxy servers that helps you access their sites and buy tickets for certain events. Due to the strict rules of these websites, the ticketing proxies that SSLPrivateProxy provides are dedicated, virgin proxies.

They are called virgin proxies because they have never been used for ticketing websites before. Thus for TicketMaster or any other website, you will appear as a regular fan, looking to buy tickets to your favorite team match or band concert.

THE HISTORY OF TICKETING AND WHY YOU NEED PROXIES

From an economic point of view, tickets are a rare, finite commodity. They are released for sale at a certain time and their amount is limited. This way, ticket vendors create an urgency in the fan minds, making them rush into buying ticket.

With the ticket selling process, the advent of scalpers was a matter of time. Scalpers are people whose main job is to get fast and as many as possible tickets and to sell them for a premium.

In the old days, scalping was achieved by waiting in front of the ticket booth at venue locations. But, with the advent of the Internet and online commerce, scalpers migrated on-line.

Ticketing websites, recognized they need to limit the access to their tickets. Thus, they started implementing restrictions and bans for IPs that were employing suspicious behavior.

Once websites started banning people for ‘suspicious behavior’, along the way, the process of acquiring tickets became harder for everybody, even for one time only ticket buyers who could not buy tickets to attend their favorite event.

WHO CAN USE TICKETING PROXIES

Long story short, almost everybody can use these proxies. Ticketing proxies from SSLPrivateProxy are managed the same way as any other private proxy. You don’t need special software for using them. Neither there are any setup fees. And the installation requires just a few minutes.

Fans can use this type of proxy to actually stand a chance in the craze that takes place when tickets are released to market.

In addition, scalpers interested in using these proxies can integrate them in their automation tools such as ticket bots.

HOW TO USE TICKETING PROXIES

As mentioned above, it is well known that ticket websites are very restrictive with their users. This sort of restriction can be attributed to their high demands. For the time being, they can afford to treat their users this way.

From a user perspective, getting in front of other users in order to acquire their favorite tickets is a high priority. Ticketing proxies can help them make the ticket purchase possible.

Due to their unusual restriction, the word come out that websites such as TicketMaster have dedicated teams of fighting automated ticket buying.

For scalpers, using a ticketing bot have always been difficult. Most commercial bots, even after implementing ticketing proxies, were recognized and users and their IP were banned. Today, most scalpers rely heavily of ticketing proxies, as this is the only way to stand a chance to buy tickets. And for automation, most successful scalpers started developing their own bots to run through these proxies. Some scalpers have even started hiring programmers to tweak their bots constantly.

You need to buy ticketing proxies from SSLPrivateProxy if you are looking to stand a chance to acquire tickets for your favorite band concert or team match.

Anybody can use ticketing proxies in order to access the highly restrictive ticket websites. Scalpers found it difficult accessing ticketing websites with commercial bots, so most of them started developing private bots that are working through ticketing proxies.

I thought of being cheap at first and thinking I could use those unsafe free proxies. With slow net and such. Then a friend told me about SSLPriateProxy.com
Really, no regrets here. The proxies worked really good.
For anything, for browsing, for saving/sending and also for gaming.

The customer service was really good as well. Whenever Imma use proxies again, I’m definitely going to use them from this company again.

Thanks alot for everything.