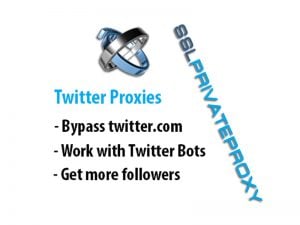 Using Twitter proxies for social media marketing is a straightforward process. First, you get your multiple accounts set to connect to the social media platform via Twitter proxies. Then, you start following as many people as possible and distribute content in order to generate traffic to your website.

However, using Twitter proxies as such is simple but not easy. A marketer, in its journey to generate traffic for its website can make several mistakes that could cost him not only his Twitter accounts but also can risk getting his website links blocked on the social media platform.

We consider there are a few mistakes one should avoid making in its Twitter journey. From the proxy allocation to content management, there are several factors worth considering in order to have a successful content machine through Twitter proxies.

Never, ever automate your accounts straight after you have allocated them to your Twitter proxies.

Your accounts should replicate human behavior. However, before they start doing so, you have to warm them up.

First, after creating your accounts, keep them connected, but inactive for a few days. Then, start slowly building them up. By slowly, we mean to start following two to four users per day.

Most social media automation tools will offer the option to unfollow users. We recommend you start unfollowing users after a period of time. Do not start following users the day after account creation.

We consider that the unfollowing setting is what triggers phone verification and account blocking.

Starting to tweet your links with all your accounts is very tempting. However, this is a sure way of creating a connection between your accounts.

One of the main purposes of using Twitter proxies is to separate each account’s behavior and risks. Therefore, do not create a connection between them by sharing the same links of your website.

Best practices recommend you create satellite accounts for your main account. And take a tiered approach to your content distribution. Meaning, use one account to distribute the links to your website and then use the other, secondary accounts, to share the tweets of your main accounts.

You can take a cautious approach to account distribution and Twitter proxies allocation. But if you create your accounts from the same IP, if any account is banned, the risk for the other accounts increases.

In addition, never buy accounts if you don’t know their creation process.

We recommend you create your accounts manually. While this is a time-consuming process, is the safest approach. Moreover, you should use the same Twitter proxy both for account creation and account management.

After you created your accounts through Twitter proxies, it is time you start following users and expect a certain follow back ratio.

Many marketers will consider following same user sources for multiple accounts. The logic behind this action indicates marketers want to create the authority status for their main account. However, this action limits the eyeballs in front of which your tweets are posted.

You should try to diversify and reach the largest audience possible for your accounts. Remember, social media marketing through Twitter proxies is a scalable operation. The more users you reach, the higher the chances of boosting organic engagement.

This is another appealing, yet risky approach for your Twitter proxies and social media marketing operation.

Using your secondary accounts only to distribute your main account’s content raises the risk of having certain accounts reported as spammy.

In this way, the content distribution will look impartial and less spammy.

If you think of starting to use Twitter proxies to create a social media operation with the goal of generating traffic for your website, avoid the above-mentioned mistakes.

Furthermore, you should consider buying Twitter proxies from SSLPrivateProxy. We offer virgin Twitter proxies, that do not cause any risk to your accounts.