Use twitter to monetize your affiliate business in 3 ways

By SSLPrivateProxy on October 7, 2016 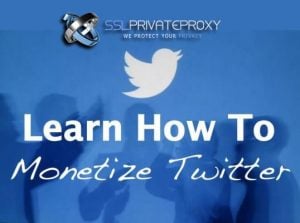 With 100 million daily active users and niches in every sector, Twitter is one of the best social media platforms to market your services or engage with your audience. There are several ways to use Twitter or to monetize it.

Below, we are going to show three ways in which you can monetize your multiple Twitter accounts that you need to run through private proxies. Proxies as Twitter proxies.

As any other social media platform, Twitter is one of the most dynamic online mediums. In order to survive, grow and generate returns, you need Twitter virgin proxies. These are HTTPS proxies that have never been used for Twitter. Thus, your accounts are safe.

The general recommendation is to use one account per private proxy. In this manner, you ring fence your accounts and safeguard them.

HOW TO GENERATE PROFITS

Twitter allows you to insert links into your tweets. Basically, you can use Twitter as a traffic generator. And if you have multiple accounts, you can leverage Twitter as a major traffic source for your website.

SSLPrivateProxy is offering Twitter private proxies that you can safely implement in your marketing operation.

This strategy works only if your services or products are relevant to the developing trend. And private proxies come into play when using multiple accounts in different niches.

The above strategy of multiple accounts automated and connected through Twitter proxies assumes that you are running either a review website or an affiliate marketing website.

Everybody loves discounts. And the bigger the audience, the better the chances that you will convert more leads.

As mentioned above, a simple way to reach more followers is to run multiple targeted accounts. You can run these accounts with social media tools and Twitter proxies.

If your website is selling discounts, you don’t need to create content or develop new products. Basically, you are running a commission based business, similar to affiliate marketing.

The strategy is to follow users and promote at the same time, either through Tweets or direct messaging when you get re-followers.

In addition, with this strategy, you can run as many accounts in as many different niches as possible. The more accounts run through Twitter proxies the better.

With this strategy, your accounts are managed as a media company. Basically you will be selling impressions or engagement.

For this strategy, running one account per Twitter proxy is more important than for the other strategies, because each account is like a piece of real-estate. You need to keep them independent to each other.

If you are selling professional services, Twitter is one of the most important social media platforms. In addition, it is the best platform to engage with your audience. Its 100 million daily users make Twitter a great traffic generator for your website. Traffic that eventually will convert into prospects and finally buying customers.

To run multiple accounts in different niches on Twitter, you will need Twitter virgin proxies. These are private proxies, allocated to you, that have never been used for Twitter before.

There are many ways to monetize Twitter. The above three methods were presented due to their ease of implementation. To get the best returns, you can implement these methods through multiple Twitter accounts connected through Twitter proxies.

The first method is to leverage Twitter trends through your accounts and generate traffic for our website. The second method is to follow authority accounts’ followers and promote discounts. And the third method is to promote content similar to a media company.